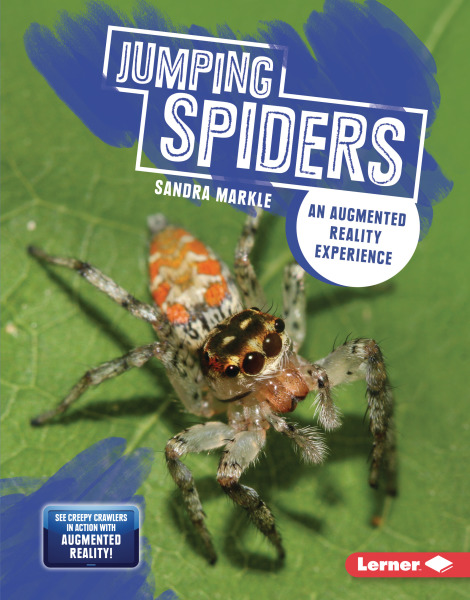 EXCITED to share! Augmented Reality lets the spiders in my Lerner Publishing book become 3-D and MOVE. Not scary--just AWESOME way for kids to learn. It's the future of Picture Books here NOW!!!!!
at January 13, 2021 No comments: 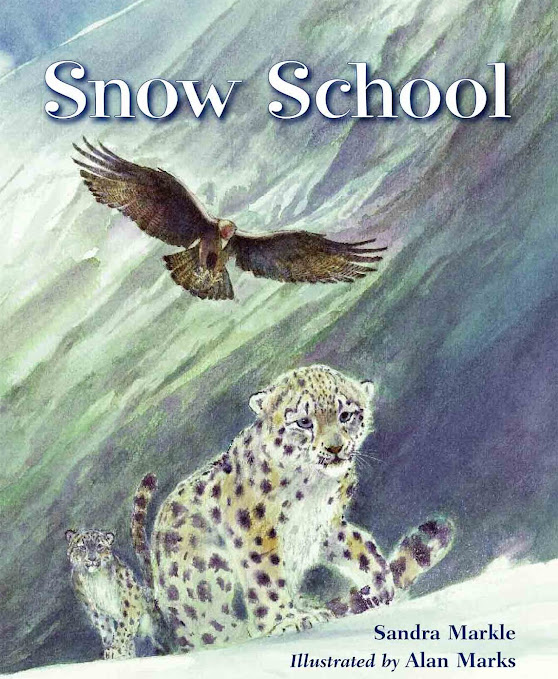 Ready to hear this story? Ok--sit back and enjoy!
Now, keep going to explore more and do some fun discovery activities....
When I can, I love to investigate firsthand. But, when that isn't possible, I track down experts who have been able to study animals in amazing wild places.  Then I can share the stories talking to those experts inspire--like Snow School.  I discovered that story about snow leopard cubs growing up from interviewing Dr. Tom McCarthy who has spent many years climbing the high, rugged mountains of Pakistan in order to learn about the life and behavior of snow leopards.  That's it--shown in red on this globe. 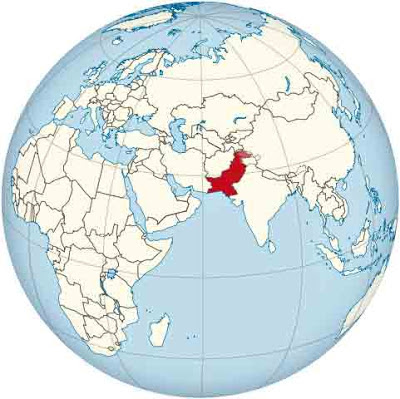 The setting for story is the Hindu Kush Mountains in that country.  That high mountain habitat is one of the harshest on Earth. It requires the cats to be able to chase fast prey downhill over very rocky terrain. 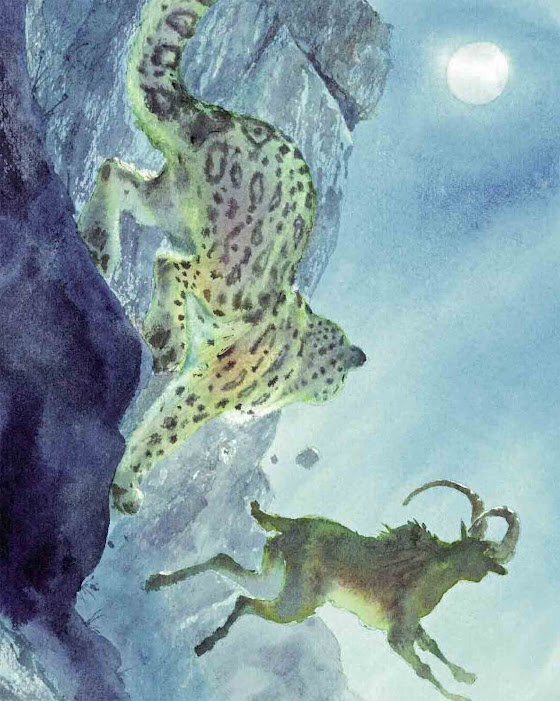 Even during his many years studying snow leopards Dr. McCarthy shared that he only had a chance to watch a few downhill chases as snow leopards caught prey.  He said, “Once, I was lucky enough to see a mother have two cubs with her while she hunted.”
Dr. McCarthy guessed the cubs were in training.  Snow leopard cubs spend two years with their mothers learning to survive on their own.  That inspired me to wonder what lessons snow leopard cubs need to learn in order to be successful in the extreme conditions of their home habitat.
For one thing, as soon as they’re big enough, snow leopard cubs travel with their mother. That way they get a close look at the features of their environment.  And they learn the shortest, safest routes to take.

The snow leopard’s habitat is really a high desert with very steep terrain.  When these cats hunt, they have to chase down prey animals, like ibex, capable of running down steep, rocky slopes without falling.  And they have to pounce at just the right moment to stop their prey without going over a cliff. 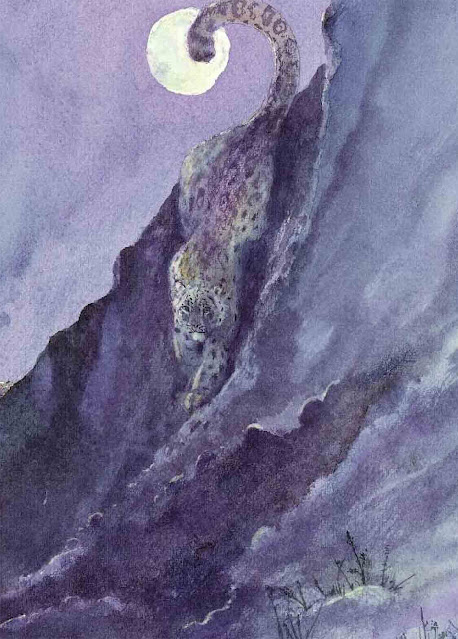 Snow leopards do have some natural built-in advantages. One is a very long tail.  Dr. McCarthy reports that a snow leopard’s tail is all muscle and that it’s heavy. He said, “It must even be heavy for the snow leopard.  In snow, I’d see a mark where  a cat would start to drag its tail after every two or three steps.  So holding up its long tail must be tiring.”
Having such a long tail is worth the effort, though, when the snow leopard starts to run.  It swings its tail back and forth and that helps it stay balance while twisting and turning.  To get a feel for how its tail helps a snow leopard stay balanced, try this.  Stand on one foot with your hands at your sides.  Then repeat standing on one foot but this time stretch out your arms and move them forward and backward.
Snow leopards also have big feet that act like snowshoes, helping them walk on top of fluffy snow.  In fact, Dr. McCarthy reported a snow leopard’s feet leave very round footprints because their feet are about as wide as they are long (about four to five inches in both directions.) 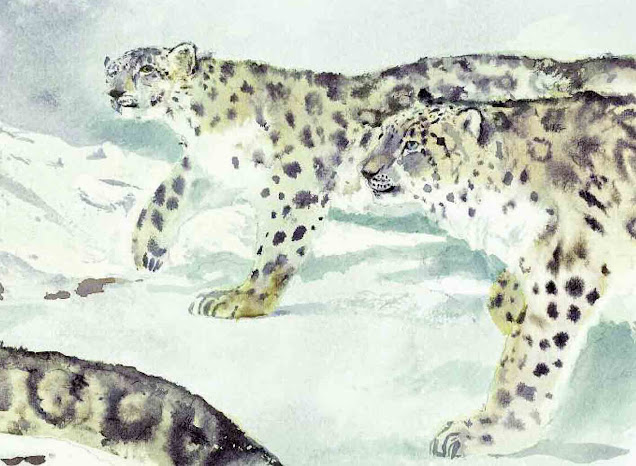 These cats also have a lot of fur around their toes and the pads of their feet to shield them from the ice and snow.  Like housecats, snow leopards have retractable claws.  They put these out to help them climb and to stop themselves from skidding.
Dr. McCarthy reported that once a snow leopard catches prey it needs a safe place to eat—safer than on a steep mountainside.  Dr. McCarthy said, “I’ve watched a snow leopard drag a big goat that weighs as much, if not slightly more, than the cat does.  And it drags this prey uphill.”
Imagine pulling something that weighs as much as you do.  Now, imagine doing it the way a snow leopard does.  This cat bites to grab its prey.  Then it drags this weight between its legs.  This is another behavior snow leopard cubs learn by being copycats, doing what their mother does. 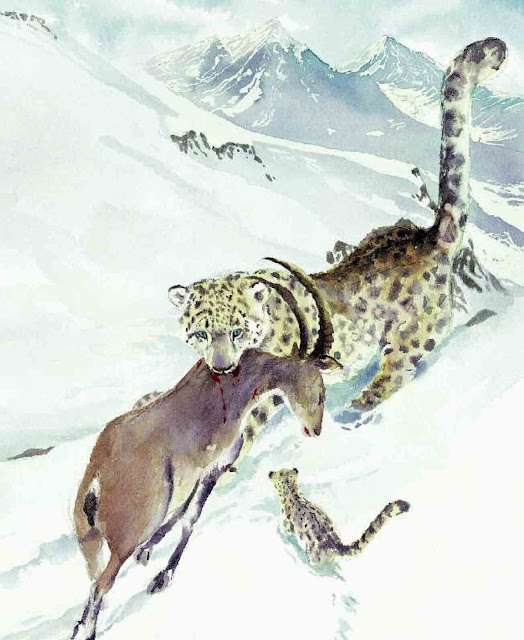 You might be surprised to learn that snow leopards usually only get a chance to catch big prey about once a week.  So when it does, the cat is likely to stay by its prey and eat as much as 25 pounds of meat a day for two to three days. 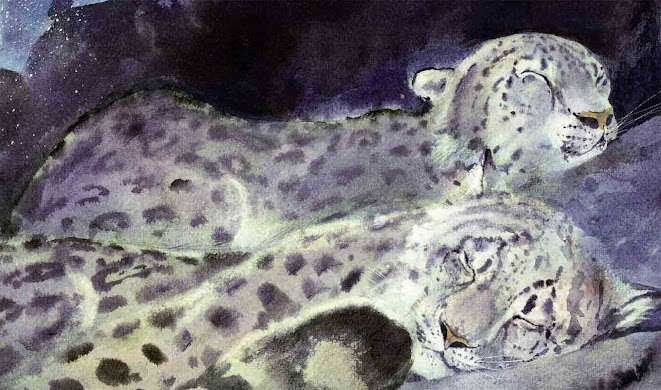 Can you guess what snow leopards do after such big meals?  You’re right!  They sleep.  Like lions, tigers, and housecats, snow leopards sleep most of the day to save their energy for hunting.
at January 10, 2021 No comments: 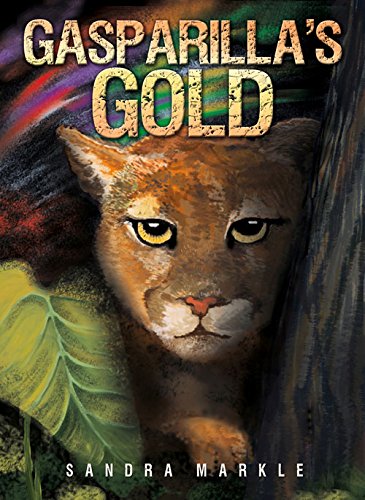 Ready for FUN!? Then click AMAZON to share my Middle Grade novel now available on Amazon Kindle as well as in print. In fact, it's FREE on KindleUnlimited and super inexpensive to own. I've even made it available to enjoy and then loan.

But first, I want to personally share a sample. So I'm reading the first two chapters aloud. I had fun launching back into the action and the characters. I hope you enjoy it!

For more FUN...Enjoy this Animal Search featuring all the animals you'll find in GASPARILLA'S GOLD. 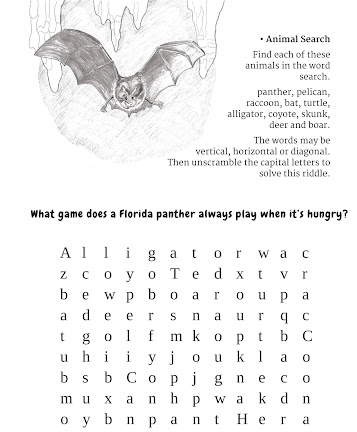 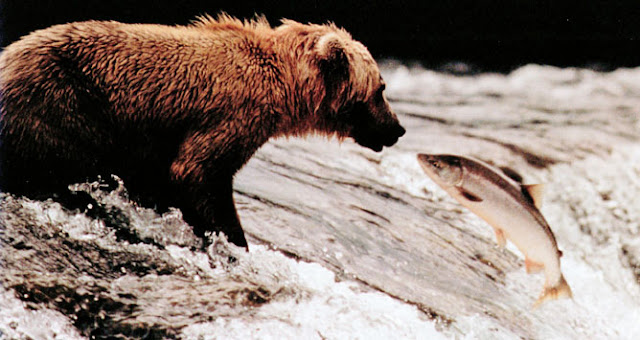 There's nothing more fun than figuring out...

"What will happen next?"

Actually, the bear got this! 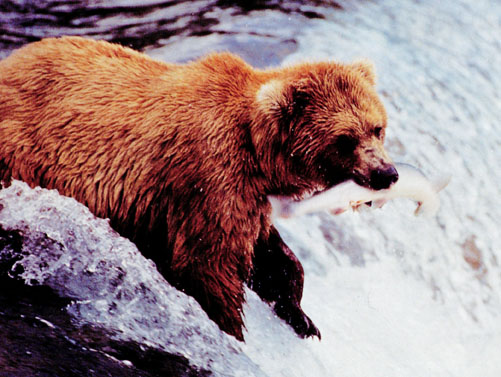 So how's your reaction time? 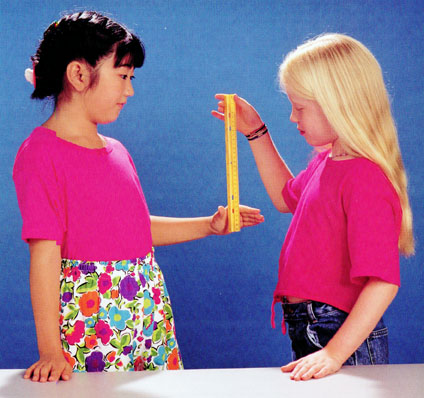 To test it, have a partner hold a ruler at the top with zero end down.Hold onto the ruler so your thumb is close to the zero.Next, open your grip so your fingers are no longer touching the ruler and stay alert.Your partner will suddenly release the ruler.Grab it.Then look to see which number is under your thumb. The lower the number, the faster you were able to react.Repeat this test two more time.Does your reaction time improve with practice?  Switch and test your partner's reaction time.
Now, really STEM this nature moment.
What if you needed to catch fish to eat? How could you mimic the bear--and even do better to catch not just one fish but a bunch? Brainstorm! Plan!
Native Americans and early pioneers needed to do exactly that to store food for winter.
Check out these sites:
Native American fish traps
Learning from the past
ONE MORE CHALLENGE 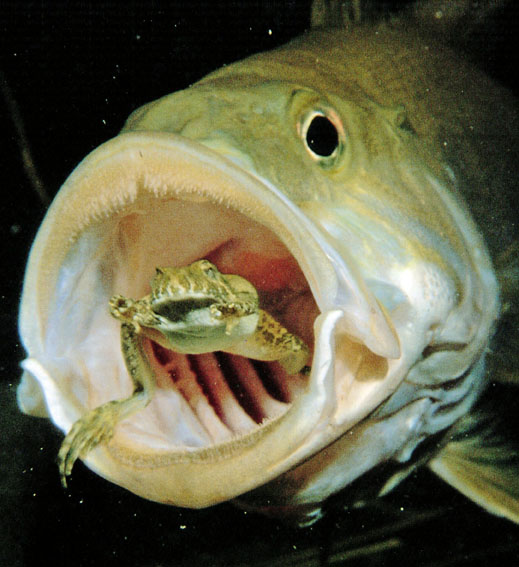 Will the fish be able to gulp in the frog?

Or is a frog quick enough in the water to be likely to escape?

Imagine yourself in the frog's place. What would your next move be?

Imagine yourself in the fish's place.  What would your next move be?

Predict what's most likely to happen next.  Tell why you made that choice.

ARE YOU MISSING OUT?

To ALL Teachers, Librarians, and Media Specialist...

ARE YOU A MARKLE'S BOOK EXPLORER? 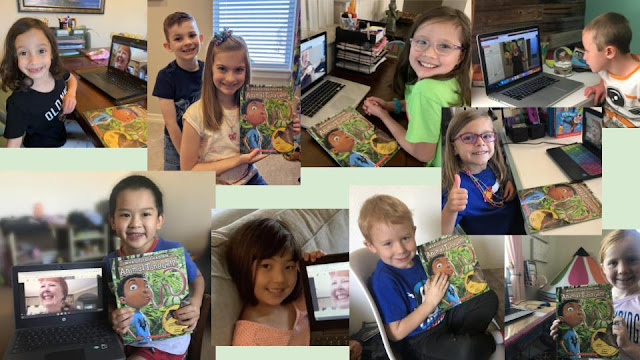 It's the way to receive personalized, monthly emails from me with fun facts and FREE, ready-to-go, activities. These are all what I call STREAM activities with the "R" for reading.
Just email sandramarkle@yahoo.com and share
Your name, School Name and Address, and email address.
DON'T MISS OUT ANY LONGERSign up now!
at October 30, 2020 No comments: 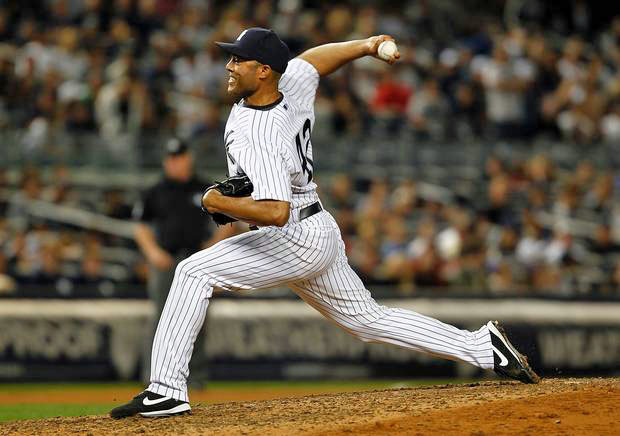 It's the WORLD SERIES!
Share some baseball Discovery-FUN!
Do Cold Balls Bounce Less? 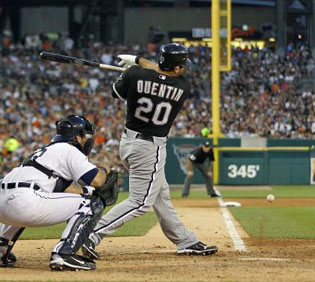 In 1965, the Detroit Tigers accused the Chicago White Sox of refrigerating the balls used by their pitchers.  Should a team care if their batters are pitched ice-cold balls?  You can find out.

Slip at least two baseballs into a plastic grocery sack to keep things clean and chill them in a refrigerator for an hour.  While you're waiting think about how chilling changes other things, like pancake syrup or butter.  Then conduct this test to find out the cold facts.


Work outdoors on a paved area or indoors on a smooth, hard surface (after checking with an adult).
Have someone hold a measuring stick straight up with the starting end of the scale on the floor.  Drop the balls one at a time from the top of the stick.  Be sure someone is watching closely to check exactly how high each ball bounces.  Write down each ball's bounce height. Divide by the number of balls tested to find the average bounce height.

Next, spend five minutes warming up the balls using anyway you can think of to do the job safely, such as holding the balls in warm hands or even setting them on a hot water bottle.Then repeat the bounce test with the warmed balls.

Were the warm balls better bouncers?
They should be!

Now, here's the rest of the story.
Before this event, Major League home teams used to supply game balls to the umpire one at a time throughout the game. So the home team's pitchers could be given chilled balls. Worse, according to the White Sox, the Tigers baked the balls given to their team's pitchers. That meant the Tigers were slugging hot balls.
To end the squabble, today, Major League rules require the home team to supply all the baseballs to be used during the game two hours before game time.

The Balls Have Changed--But Not Much 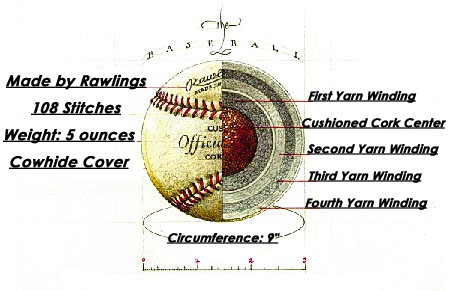 In the past 100 years, baseballs have only changed in one way. In 1974, cowhide replaced horsehide as the baseball's covering.  Otherwise a baseball is exactly the same, today, as it always was.
There's a cork core inside a rubber ball surrounded by nearly a quarter mile of woolen yarn, a winding of cotton/polyester yarn and a leather jacket sealed with 108 stitches (not one more or one less).

You'll need a wooden bat and a hammer (either a real hammer or a wooden mallet) for this activity.  Your job is to find the one special spot on the baseball called the sweet spot.
It has that name because striking a baseball with exactly that spot on the bat will make it travel farther than striking it at any other point.  That happens because striking the ball at the sweet spot causes the least amount of vibration within the wooden bat.  And that means the greatest amount of energy will be transferred to the ball.  So where is the sweet spot?

Have a partner grab the end of the bat's handle and let the bat hang straight down. 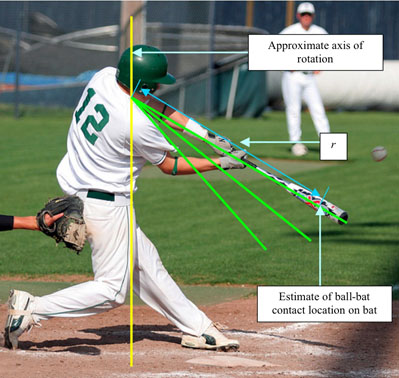 To be precise, measure about six inches (15 centimeters) up from the fat end of the bat.  That's where the sweet spot is usually located.

When a Major League player strikes the ball at that
spot, it's not uncommon for the ball to leave the bat
traveling 100 miles (160 kilometers) per hour.

In the past, Major League ballplayers tried to make balls travel farther by swinging heavy bats.  Here's a photo of Babe Ruth at bat. The Home Run King regularly used a 42 ounce (1,190-gram) bat. Sometimes, he even used one that weighed 52 ounces (1,474 grams). 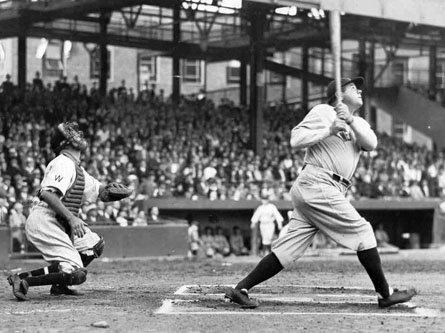 Today, players have decided they can knock balls farther by swinging faster. So they are opting to use lighter bats--ones weighing 32 or even 28 ounces (907 or 793 grams).

You might be interested in knowing that in the very early days of baseball, players were given four strikes before they struck out. 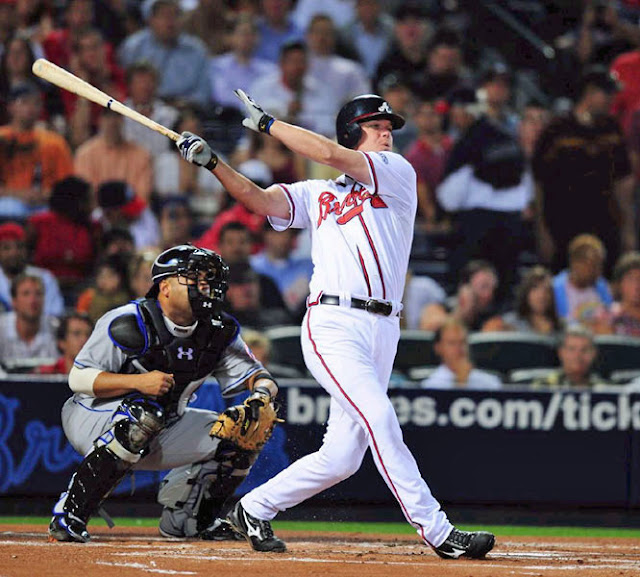 EXCITED to share! Augmented Reality lets the spiders in my Lerner Publishing book become 3-D and MOVE. Not scary--just AWESOME way for kid... 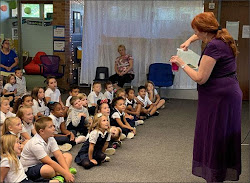 CLICK ON THIS PHOTO TO HAVE ME VISIT YOUR SCHOOL!

FEATURED BOOK OF THE MONTH

WHERE CAN YOU SEE SANDRA?